Interesting article connecting the issue of language and climate change. This also gets at the fact that we don’t always communicate what we think we are and that different groups of people communicate differently. Frank Luntz, discussed below, often uses the adage: It’s not what you say, it’s what people hear.

The science community is supposed to interpret for the rest of us, but its dialect does not always pack rhetorical oomph. “I didn’t realize that pointing to a climate graph I think is the Rosetta stone — people don’t see it the way I see it,” says Brenda Ekwurzel, director of climate science for the Union of Concerned Scientists. “We as humans don’t experience an exponential curve viscerally, in our gut.”

Frank Luntz is a popular American pollster but also famous for helping the Republican Party hone its messaging and use of language in the 1990s and 2000s. He authored a famous memo on messaging the “War on Terror.” One can argue with the ethics of what he did (intentionally tying 9/11 and Iraq in people’s minds without ever explicitly making the connection for example) but his work was devastatingly effective. This memo made for much better discussion teaching TOK 10 years ago but I think is very interesting to still study. 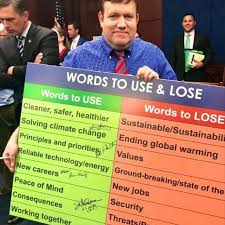